Free Kindle download promotion of A Hazy Shade of Twilight! 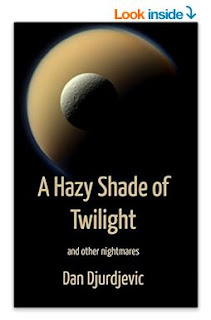 Before "The Martian" there was Dan Djurdjevic's meticulously researched, tightly written, psychological sci-fi thriller "A Hazy Shade of Twilight"...

Set in a small base on Saturn's moon Titan, the novella deals with the effects of extreme isolation and confinement on a small group of scientists - and the logistical realities of mere survival when something goes awry.

To celebrate the release of the new cover of this novella (and its associated stories), Pikkelig Press is offering as a free Kindle download from 7 to 11 October 2015.  So make sure you get your free copy while you can!

And don't forget to leave a review on Amazon!